PT thresholds are measured on nearly everyone entering a diagnostic audiology clinic, but the test sequence and the extent of the measurements often differ across clinics. Most of these differences in protocol are implemented to save test- ing time, which contributes to the cost of running a clinic. ASHA’s guide to manual PT threshold audiometry (2005) makes no recommendation concerning the puretone test sequence. In 2000, the Joint Audiology Committee on Prac- tice Algorithms and Standards recommended an algorithm that listed puretone AC testing (with appropriate masking applied) followed by puretone BC testing with appropriate masking. They acknowledged that the assessment process may vary “based on patient need and the assessment setting.” Furthermore, they stated that “decision-making . . . occurs(s) throughout this process.”
Based on informal surveys of clinicians in a variety of settings, it seems that there is considerable variability in test protocols among clinics. In many clinics, BC thresh- olds are not usually obtained from persons with normal AC thresholds (near 0 dB HL) unless the case history or risk of middle-ear problems suggests otherwise. BC threshold testing is also omitted in some clinics for returning patients with pure sensory/neural losses if their AC thresholds match those of the prior visit. A common alternative test sequence is to begin with puretone AC thresholds followed by supra- threshold word-recognition testing. After word-recognition testing, BC thresholds are measured. Although it would be useful to have puretone BC thresholds prior to AC thresh- olds to know how much masking noise can be presented safely, this advantage is outweighed by the inconvenience of having to enter the booth multiple times to reposition the BC vibrator and earphones. Valid, masked AC thresh- olds can be obtained successfully from most clients before obtaining BC thresholds.

A few clinics begin with immittance testing, which usually includes a tympanogram and acoustic reflex thresholds. If the case history does not indicate a middle-ear problem and these tests of middle-ear function are normal, then BC thresholds may not be performed, and the loss, if present, is assumed to be a sensory/neural loss. A possible risk of this strategy is that, in rare instances, persons with middle-ear problems have normal immittance measures. In this situation, a conductive loss would be missed. This approach also adds the expense of immittance testing for each client. Studies should be done using an evidence-based practice model to determine whether the assessment of middle-ear status of each client using immittance or wide-band reflectance (see Chapter 9) is justified. Another time-saving strategy might be to measure BC thresholds at two frequencies, a low and a high frequency, and if an air–bone gap is not observed, BC thresh- olds are not measured for other frequencies. A low frequency, such as 500 Hz, would assess stiffness-related middle-ear pathologies. A high frequency, such as 4,000 Hz, would identify mass-related middle-ear pathologies and collapsed canals. Since this method requires placement of the BC vibrator, the amount of time actually saved would be limited.
Despite the observed variability, it seems that it is possible for audiologists to obtain important diagnostic information about the degree, type, and configuration of hearing losses using a variety of valid, evidence-based puretone audiometric methods. Although at first glance, the puretone test procedure may appear elementary, it is clear that well-informed test procedures using appropriate and calibrated test equipment provide a necessary part of the complete audiologic test battery and form the basis for clinical decision making. ​

1. Given the known test–retest variability of PT thresholds, what is the threat to the quality of a hearing conservation program if the tester chooses not to make multiple estimates of baseline audiograms?
2. Think about examples of auditory pathology where the PT threshold might be misleading, when it might not reflect the full nature of the underlying cochlear injury.
3. Consider several cases where the ear canal volume (the volume under the earphone) might significantly affect the resulting PT threshold. Consider the client’s total volume of the outer ear, perforations of the eardrum, and possible occlusions in the ear canal. What effect will these have on the resulting thresholds?

Audiologists typically target a test ear for evaluation while being vigilant for the possibility of the patient hearing in the non-test ear. This vigilance is warranted during bone- conduction threshold evaluation; transducer placement on the test ear side mastoid bone results in activation of bone conduction bilaterally. The so-called cross-over from the test ear side to the non-test ear can occur with minimal interaural attenuation, ranging from 0 dB at 250 Hz to 15 dB at 4,000 Hz (Studebaker, 1967). Caution compels most audiologists to assume the worst-case scenario of 0 dB interaural attenuation, that is, equal tone intensity at the test and non-test ears. Bone conduction thresholds are therefore not typically considered to be ear-specific unless sufficient masking noise is delivered to the non-test ear. There are many variables to consider while masking, such as when to mask, masking noise type, masker intensity, and accounting for the occlusion effect caused by the earphone on the non- test ear (see Chapter 6 for details).

Understanding the influence of presentation level on performance is best described by psychometric functions. In simple terms, a function is when you measure a change in a dependent variable (y-axis; e.g., number or percent correct, which is a psychological variable) based on changes of an independent variable (x-axis; e.g., presentation level in HL or SNR, which is a physical variable). Figure 5.1 is a graphic display of two psychometric functions. The function to the left is an SRT function whereas the function to the right is an SRS function. The characteristic audiogram thought to accompany this type of performance can be seen in the lower right quadrant. Presentation level is on the x-axis (dB HL), whereas percent correct performance is on the y-axis. As can be seen for both functions, the percent correct is low when the level is low, and as the level is increased, the percent cor- rect increases. The dashed line in Figure 5.1 highlights the 50% point on the functions and indicates that an SRT was obtained about 40 dB HL. Also illustrated in Figure 5.1 is that the maximum point of performance (100%) was reached at approximately 75 dB HL for the SRS function. As the level is increased above 75 dB HL, no change in performance is observed. The highest percent correct score obtained by an individual is often referred to as PBmax, because historically SRSs were obtained using phonetically balanced (PB) word lists. Further discussion of PB word lists can be found later in this chapter under the section titled “Speech Recognition in Quiet.” 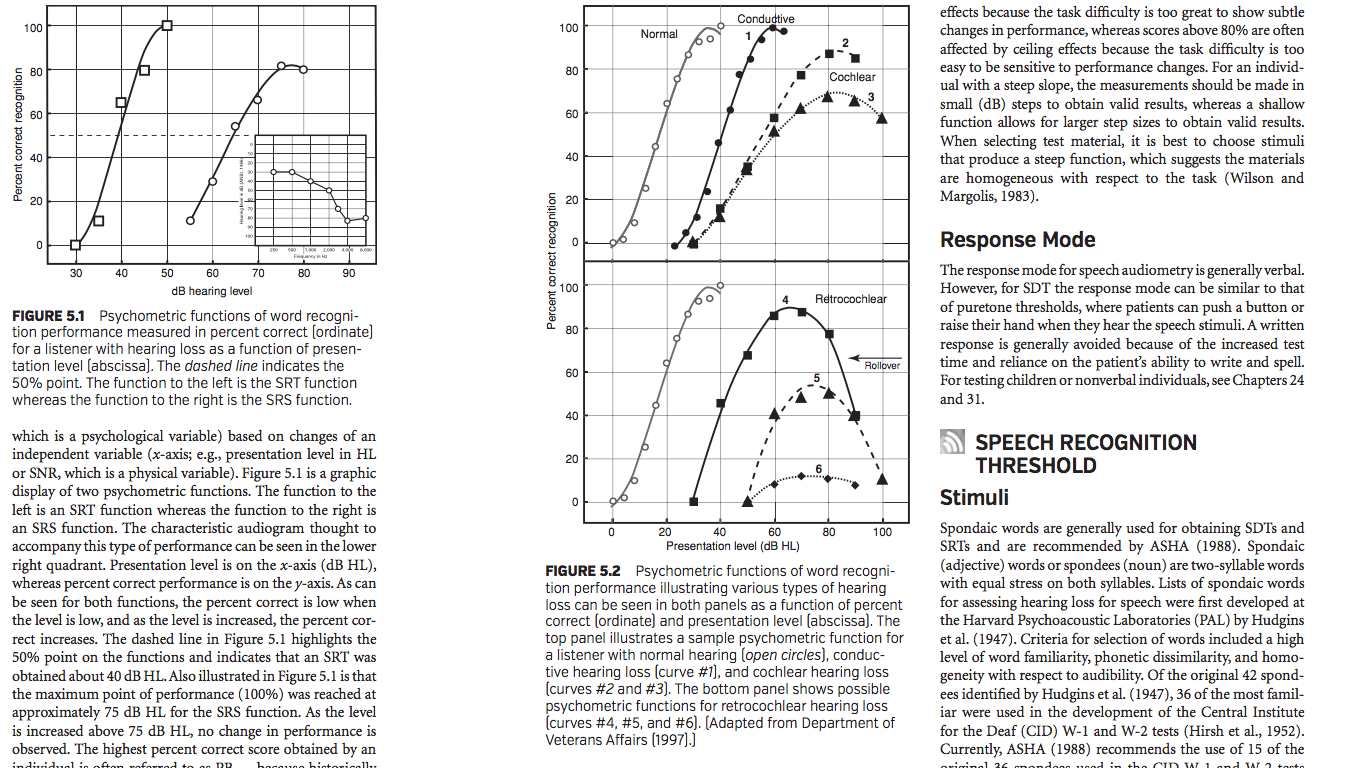 Clinical Functions of the SRT

1. Given the use of SRTs as a verification for puretone thresholds in every patient has been questioned since 1983, what is the cost benefit of measuring SRTs in a busy practice? Might the time be better spent gathering other information about the patient’s auditory functioning?
2. Determining the presentation level for word recognition testing in quiet historically has been 40 dB SL, re: SRT. Given the evidence for this level is based on listeners with normal hearing, what is most appropriate for determining the presentation level(s) for listeners with hearing loss? Additionally in an audiologic evaluation, what are the benefits of using 25 words at each of two or three presentation levels versus 50 words at one presentation level?
3. Speech recognition in quiet has been performed by audi- ologists since the 1950s. Given that the most common complaint of listeners with hearing loss is their difficulty communicating in noisy situations, should the stan- dard comprehensive audiometric battery be modified to include speech-in-noise measures?

Methods to put in Practice