This patient is undergoing a R/L retrosigmoid craniotomy microvascular decompression of the facial nerve for relief of hemi-facial spasm. The abnormal lateral spread facial EMG response was monitored to confirm adequate decompression of the facial nerve. The brainstem auditory evoked response (BAER) was also monitored to detect any compromise of auditory function with cerebellar retraction.

For a typical procedure, recording electrodes would be inserted into the mentalis muscle (innervated by the marginal mandibular branch of the facial nerve VII) and the orbicularis oculi (temporal branch). Subdermal needle electrodes are also inserted adjacent to the marginal mandibular and temporal branches of VII for stimulation. Note that the stimulation voltage required will be higher (4-20V) than for direct stimulation of the nerve intracranially.

looking for recordable activity in the mentalis muscle (lateral spread) with a latency of approximately 10ms that lasted until the facial nerve is decompressed. in some patient's, the autoexcitation disappeared after the dura was incised or when the archnoid was opened

It has been shown that it is stimulation of the facial nerve and not the trigeminal nerve.

Sometimes more than one vessel with a second one being subtle

new paper says: 3-5 stimuli, 0.5ms duration with 2 or 4 ms of interstimulus interval, train repetition of 2Hz and intensity up to 180mA

MOTOR DIVISION OF THE FIFTH CRANIAL NERVE AT THE MASSETER

​Stimulation: The marginal mandibular and zygomatic
branches are stimulated alternatively by a twisted pair of
subdermal needle electrodes (Nicolet Co., Madison WI,
USA). We used a single constant current stimulus of 0.2-
ms duration, at a stimulating rate of 1 Hz and threshold

intensity for eliciting lateral spread. During MVD, the thresh-
old intensity is adjusted for continuously eliciting the lateral

spread. If LSR disappeared, the intensity was increased up to
50 mA for few seconds in order to confirm the permanent
LSR disappearance (Møller and Jannetta, 1986a,b).
(b) Recording: Identical twisted pair needle electrodes as used
for stimulation are placed into the corresponding muscles
(orbicularis oculi and mentalis) for recordings.

(Fig. 1), monitoring the abnormal muscle response can guide the

surgeon during MVD which results in a better postoperative out-
come (Møller, 1987). If LSR only decreases in amplitude when a

vessel is identified and moved off the facial nerve, the LSR disap-
pears completely. 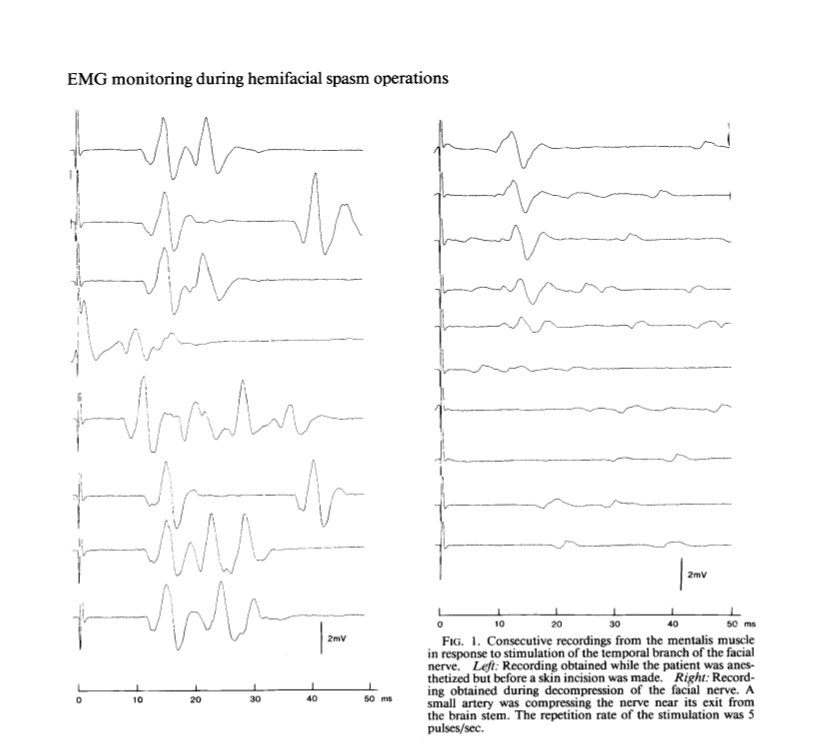