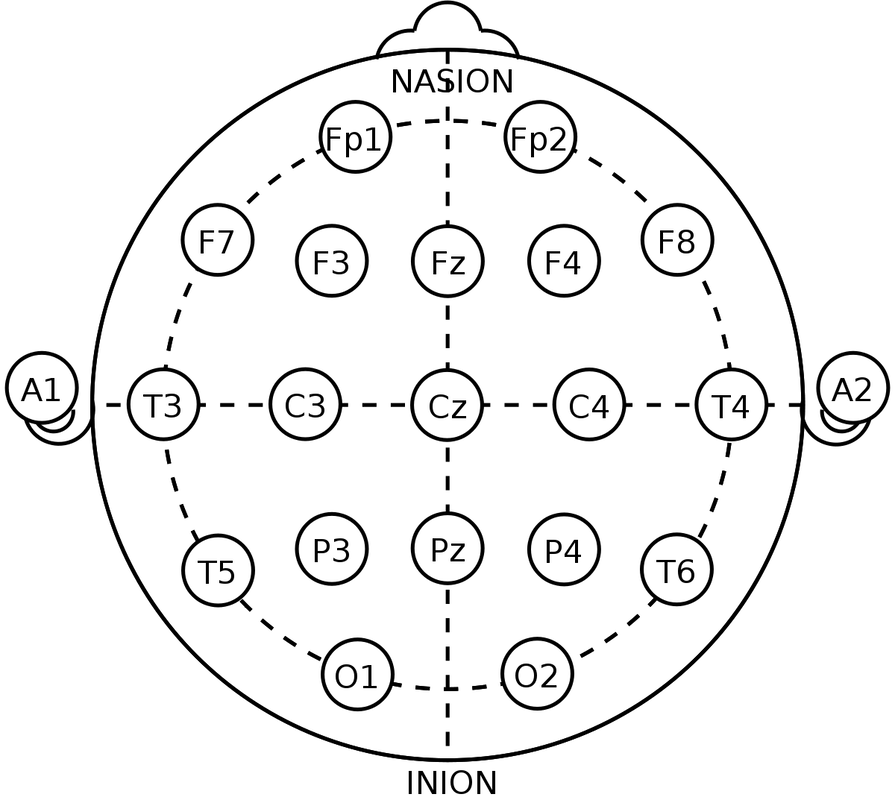 F - Frontal    C - Central     T - Temporal    P - Parietal    O - Occipital     Z - Mid-line
Fp - Frontal Polar    L - Odd    R - Even     Mid-line to Lateral Numbers Increase; C1 medial to C3, C2 medial to C4
Prime / ' - 2-3mm posterior placement     CP3 means 1/2 way in between proportional    CPi - ipsilateral to site    CPc - central lateral
The international 10-20 system is a internationally recognized measurement system that provides a uniform map to cover the entire of the surface of the scalp into regions that are measured into ratios of 10 to 20 percent recommended anatomical landmarks measurements that allows one to map the head with precision to determine electrode placement for stimulating and recording of neuroelectric potentials. Specific anatomical landmarks are identified and then approximations of 10 to 20 percent distances between the landmarks determine intervals of electrode placement. This allows for replication and modification to be consistent over time. It also allows for generation of lines The American Clinical Neurophysiology Society recommends a minimum of 21 electrodes in the International 10-20 system however approximatey 75 electrode sites at five anterior/posterior planesare mapped.

Exact measurements are needed to precisely determine the placement of each recording electrode however, in the operating room, quick approximations and modified placement are often used using ones hands. Measurements that are best made with a flexible measuring tape are modified by visual and hand measured approximations.

EEG measurements are made in a sequence of five steps however the full gamut of electrode placement for intraoperative neuromonitoring is not as extensive and approximated.

The measurements refer to three bony landmarks of the skull: (1) the inion, or the bony protuberance in the middle of the back of the head or the projecting part of the occipital bone at the base of the skull or the nape of the neck or the external occipital protuberance, (2) the nasion, or the bridge of the nose directly under the forehead or the depression of the skull in between the eyes, and (3) the preauricular point, or the depression of bone in front of the ear canal.

Step 1: The distance between nasion and inion is measured along the midline. Along this line, the frontopolar point, Fp, is marked at 10% above the nasion. Frontal (Fz), central (Cz), parietal (Pz) and occipital (O) points are marked at intervals of 20% of the entire distance leaving 10% for the interval between O and inion. The midline points Fpz and Oz are used only for intermediate measurements but routinely receive no electrode.

For IOM electrodes are typically placed at FPz, Cz, CP3, CP4 and CS5 for Somatosensory Evoked Potentials, at C3, C4 for Motor Evoked Potentials and C3', C3 and C4', C4 for linked quadripolar stimulation. A1 & A2 are used for ABR and XXXXXXXXXX for 8 Channels of EEG.

Step 2: The distance between the two pre-auricular points across Cz is measured, Along this line, the transverse position for the central points C3 and C4 and the temporal points T3 and T4 are marked 20 and 40% respectively from the midline.


​International Federation of Societies for Electroencephalograpy and Clinical Neurophysiology (IFSECN) recommended a specific system of electrode placement order standard conditions for use in all laboratories. This is the system now known as the international 10-20 system. Specific measurements from these bony landmarks are used to determine the placement of electrodes. From these anatomical landmarks, speific measurements are made, and then 10% to 20% of a specified distance is used as the electrode interval. This enables replication consistently over time and between laboratories. The American Clinical Neurophysiology Society (formerly the American Electroencephalographic Society) has recommended using a minimum of 21 electrodes in the international 10-20 system.

In 1991, the American Electroencephalographic Society added nomenclature guidelines that designate specific identifications and locations of 75 electrode positions along five anterior-posterior planes, lateral to the mid-line of 11 specific sites. In addition, four coronal chains lie anterior and four posterior, to the chain of 13 electrode sites between the earlobe electrodes along the midline at the Cz electrodes. Several electrodes have different names in the 10-20 system and the extended nomenclature. The electrodes T3 and T4 in the 10-20 system are referred to as T7 and T8 in the expanded system and T5 and T6 are referred to as P7 and P8 under the new nomenclature.

Internationally recognized map of the surface of the scalp separated into regions that can be measured with ratios of 10 and 20 percent,

Electrode Placement; fisch & spehlmann's EEG Primer
The International 10-20 system of electrode placement provides for uniform coverage of the entire scalp. It uses the distances between bony landmarks of the head to generate a system of lines which run across the head and intersect at intervals of 10 or 20% of their total length. Electrodes are placed at the intersections. The uses of the 10-20 system assures symmetrical, reproducible electrode placement and allows a more accurate comparison of EEGs from the same patient and from different patients, recorded in the same or different laboratories. The system is flexible: additional electrodes which may be needed to accurately localize an abnormality can be incorporated by further subdividing the distances between intersections using the nomenclature of the modified 10-20 system.

The standard set of electrodes for adults consists of 21 recording electrodes and one ground electrode; 22 electrodes. The recording electrodes are named with a letter and a subscript. The letter is an abbreviation of the underlaying region: prefrontal or frontopolar (Fp), frontal (F), central (C), parietal (P), occipital (O) and auricular (A). The subscript is either the letter z, indicating zero or midline sagittal placement, or a number, indicating lateral placement. Odd numbers refer to electrodes on the left, even numbers refer to electrodes on the right side of the head. The numbers increase with increasing distance from the anterior posterior midline of the head. The inferior frontal electrodes F7 & F8 are often called "anterior temporal" electrodes because they fairly fatithfully record activity from the anterior temporal area.

Exact measurements are needed to precisely determine the placement of each recording electrode. Measurements are best made with a metric measuring tape of cloth or plastic. A grease pencil is used to mark electrode locations and the intermediate measurements needed to determine them. The measurements refer to three bony landmarks of the skull: (1) the inion, or the bony protuberance in the middle of the back of the head, (2) the nasion, or the bridge of the nose directly under the forehead, and (3) the preauricular point, or the depression of bone in front of the ear canal. Measurements are made in a sequence of five steps. Although the older nomenclature of the 10-20 system is used in the following description, readers are encouraged to adopt the newer terminology of the modified 10-20 system in which T3 and T4 are renamed T7 and T8 and T5 and T6 are renamed P7 and P8.

Step 1: The distance between nasion and inoin is measured along the midline. Along this line, the frontopolar point, Fp, is marked at 10% above the nasion. Frontal (Fz), central (Cz), parietal (Pz) and occipital (O) points are marked at intervals of 20% of the entire distance leaving 10% for the interval between O and inion. The midline points Fpz and Oz are used only for intermediate measurements but routinely receive no electrode.

Step 2: The distance betwen the two preauricular points across Cz is meassured, Along this line, the transverse position for the central points C3 and C4 and the temporal points T3 and T4 are mareked 20 and 40% respectively from the midline.

electrodes placed at Fz, Cz. and Pz, at all lateral points designated above on or near both ears in positions called A1 and A2 or non the mandibular angles in positions called M1 and M2, and on the point chosen for the ground electrode usually in the middle of the head or over one of the mastoids. The use of a smaller number of electrodes in routine EEG is now considered substandard. If needed, additional electrodes may be placed midway between these recording electrodes. In some cases, scalp lesions, skull asymmetries or other abnoralities may make it impossible to place electrodes in the positions of the 10-20 system. In these cases, electrodes should be placed as closely as possible to these positions and as symemetrically as possible on the two sides using the modified 10-20 systme of plaement. The eviations from standar placement should be indicated in a diagram on the EEG record. Other electrode placements may be use for EEG recordings from smal infants and for monitoring of extraceerebral activity such as eye movments, heart beat, respiratiory or other movements

modified 10-20 system. The placement of additional electrodes to those routinely emplyed in the 10-20 system may be indicated to : 1 improve the localization of ictal or interictal epileptiform activyt 2 increase spatial resolution for special studies using computerized EEG signal analysis or 3 detect highly localized evoked potentials. Ther american clinical neurophysiology society has developed new guidelines for extedning the 1020 system of electroe placement. In order to create a logincal nomenclature, four electrodes, T3, T4, T5 and T6 have been renaved T7, T8, P7 and P8 respectively . The american Cinical Neurophysiology Society guidelnines that explain renaming of these electrodes and the placement of the addtiional electrodes have been reproduced in Appendix iI.

All 21 electrodes and lpacements recommednding by the internation federation of societies for EEG and clinical neurophysiology should be used. The 10-20 system is the only one officially recommended by the International Federation of Socieites for EEG and Clinical Neurophyisiology. It is the moset commonly used existing system and it should be used universally. The use of the term modified 10-20 system is undesairable when it means that head measurements ave not been made and placements have been estimated. In this case, the term estimated 10-20 placement is more appropriate.

Left side is odd numbers, the right side is even numbers, midline is Z

Practically, in the operating room before a case there isn't enough time to pull out a measuring tape and clearly define these areas so we must visually approximate and make general measurements with our hands.

Fz can be placed above posterior to the forehead/frontalis muscle where the hairline typically is in most adults. Cz can be approximating the intersection of the midline of the nasion/nose and perpendicular bisection of the tragi. Convention dictates that CP3 and CP4 are used for placement for SEP electrodes but in all practicality we are trying to get into negative space so anywhere behind the approximation of the central sulcus should yield well defined SEPs. your fingers can identify the left and right posterior "corners" of the skull with certainty. C3 and C4 are adjacent to Cz and the homunculus must be kept in mind for which muscle groups must be activated; lower limbs toward the midline and upper limbs more laterally. with the advent of quadripolar stimulation, a buffer/pocket zone around the motor cortex makes this easier to recruit with these electrodes placed anteriorly and laterally by 1-2 cm to the C3/C4 electrodes. CS5 is placed where the inion is and a ground/reference electrode can be placed in the contralateral mastoid.

The bulk of electrodes for each case can be placed this way allowing one to monitor SEPs, MEPs and 2 channels of EEG with faithful resolution. In some circumstances (each patient's anatomy is different) electrodes can be repositioned to optimize recordings.

In certain cases, (carotid endarterectomies, craniotomies, etcetera) 8 channels of EEG are used which can also be approximated with a fair degree of certainty, using left and right hemispheres in bespoke fashion catered to each surgery. General channels that can be used are:

8 electrodes per side would be ideal for maximum resolution but for practicality, ten electrodes can be used total with five placed on each side.
*Animation showing how lines/grid is determined and how one can visually discern how the grid is created 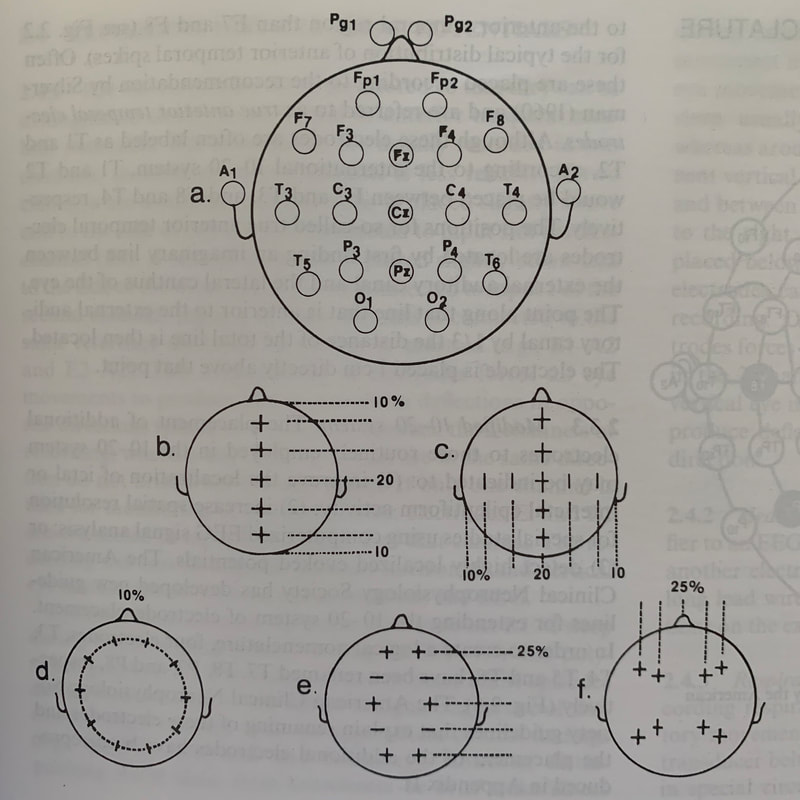 Placement of recording electrodes. (a) Electrode names and placements in the international 10-20 system. (b-f) Steps in determining electrode placement as described in the text. (F&S) 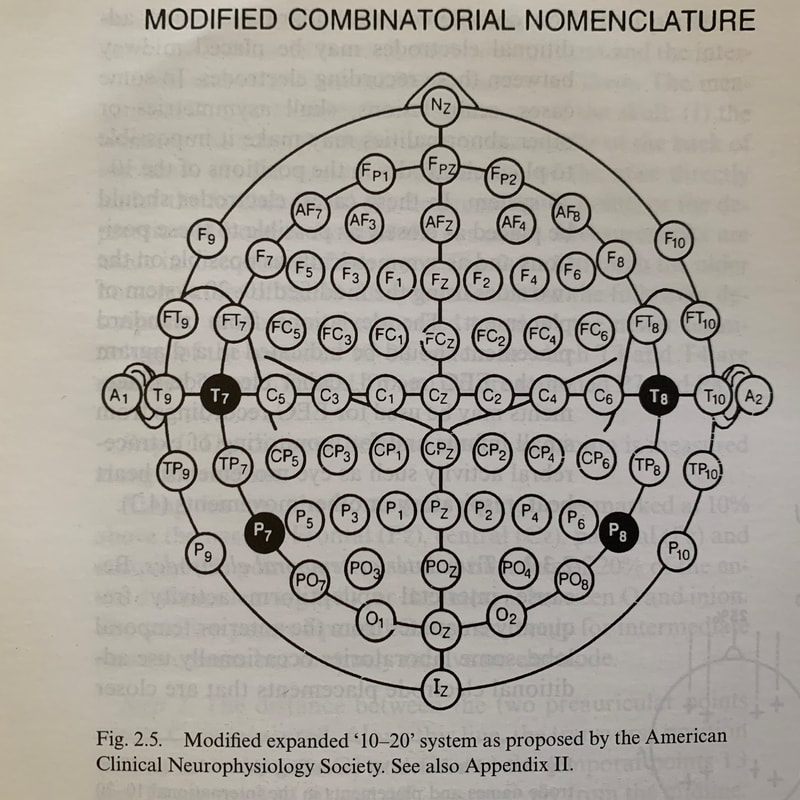 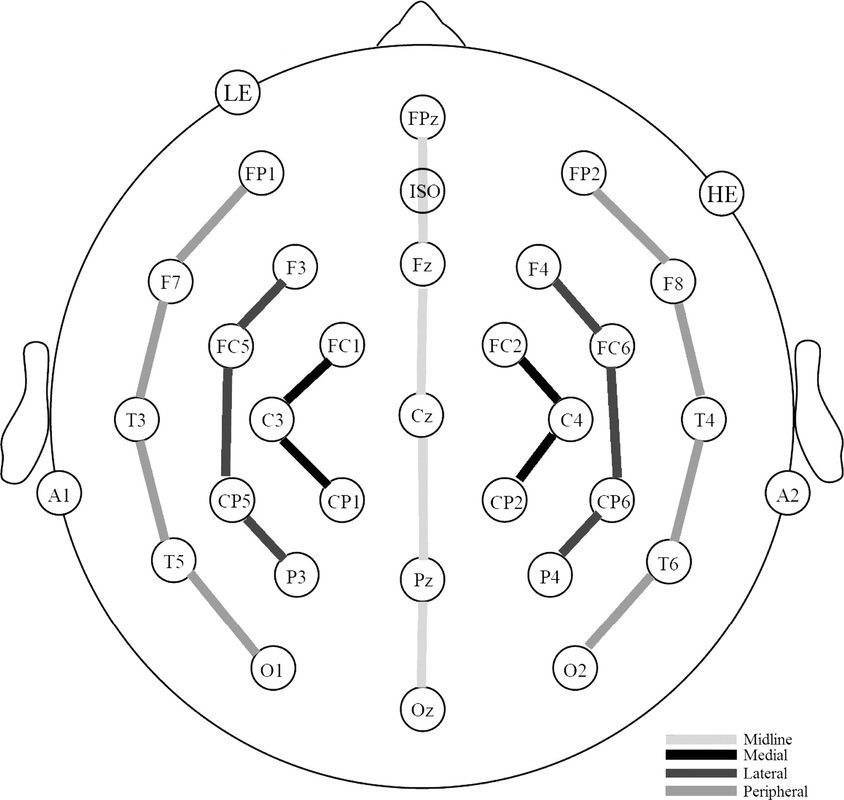 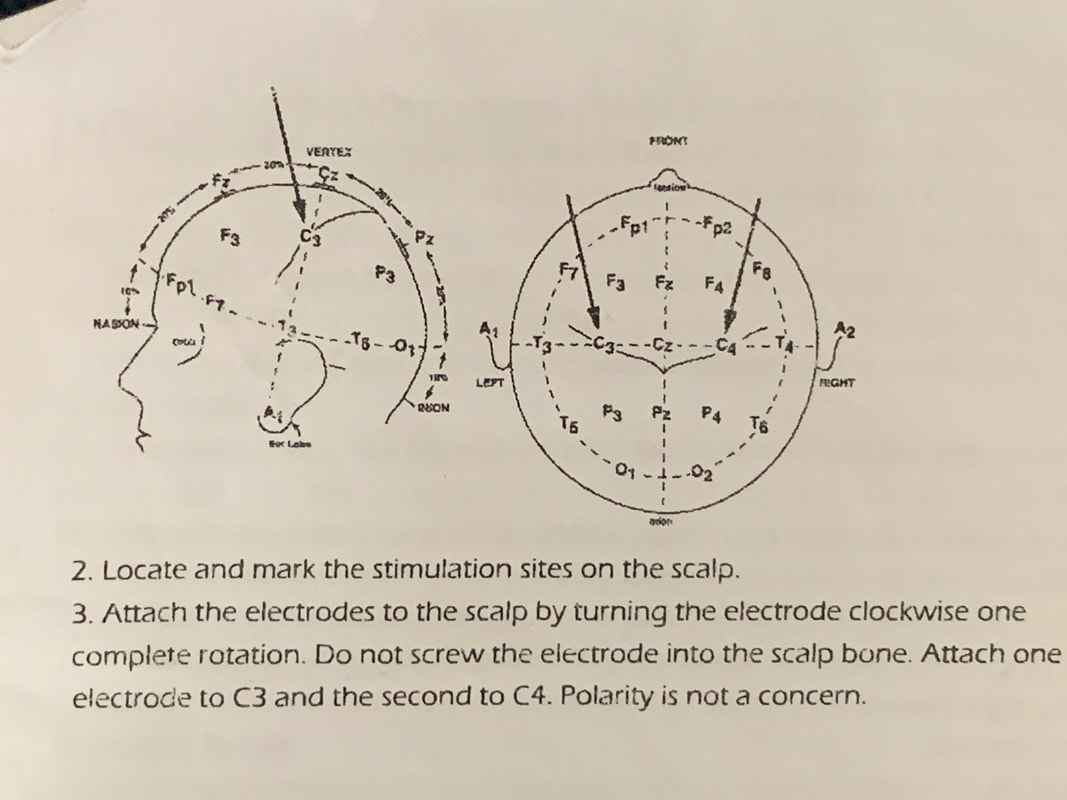 
Although the older nomenclature of the 10-20 system is used in the following description, readers are encouraged to adopt the newer terminology of the modified 10-20 system in which T3 and T4 are renamed T7 and T8 and T5 and T6 are renamed P7 and P8.
​