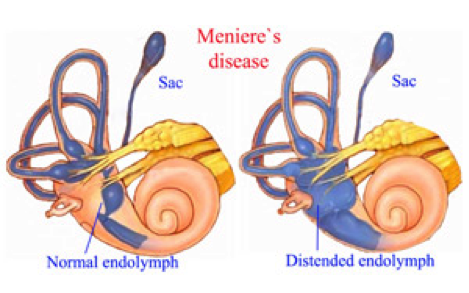 Ménière’s disease is diagnosed based on the symptoms of sensory/neural hearing loss, vertigo, tinnitus, and aural full- ness (Committee on Hearing and Equilibrium, 1995) as well as the exclusion of other known diseases. Adding to the diagnostic challenge, the four symptoms do not occur all at once, and some of them may occur only during the inter- mittent attacks that characterize this disease. It takes, on average, 1 year after the first symptom occurs before all of the symptoms are experienced by a person stricken with this disease.

​Ménière’s disease rarely occurs before age 20 and is most likely to begin between the fourth and sixth decades (Pfaltz and Matefi, 1981).
Ménière’s disease usually begins as a unilateral sensory/ neural hearing loss, but the frequency of bilateral involve- ment increases with disease duration (Stahle and Klockhoff, 1986). Although audiometric configuration is not too help- ful in diagnosing Ménière’s disease, a peaked audiogram (described in Table 3.3) is most common (roughly 60% of involved ears), and a rising audiogram is also seen quite frequently, especially in the earliest stages of the disease. However, the peaked audiogram is also seen in 13% of ears with acoustic tumors (Ries et al., 1998).