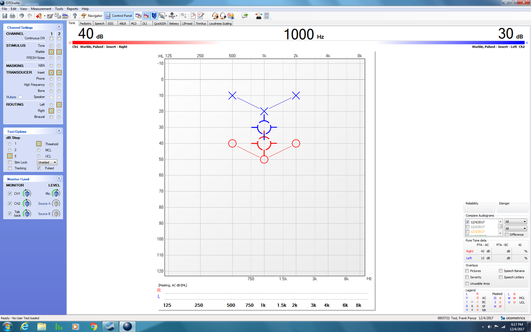 The Stenger test is based on the Stenger effect. The purpose of the test is to identify functional or nonorganic hearing loss. It also can be used to estimate threshold in an individual who is demonstrating this type of hearing loss.

The Stenger test can and should be used whenever there is a difference in air-conduction thresholds between ears of 20 dB or greater. It is best to perform the test immediately upon identifying a difference this large between ears.

For example, imagine that you have a patient who demonstrates a unilateral hearing loss at 1000Hz. Assume that the "truth" in this case is that the patient does have this loss. In this case , the patient has a sensation level of 10 dB in the right ear and -10 dB in the left ear. Due to the Stenger effect, the sound is perceived only in the ear with the higher sensation level. The patient perceives the sound in the right ear and responds appropriately, indicating that the sound was heard. This is a negative Stenger test result.