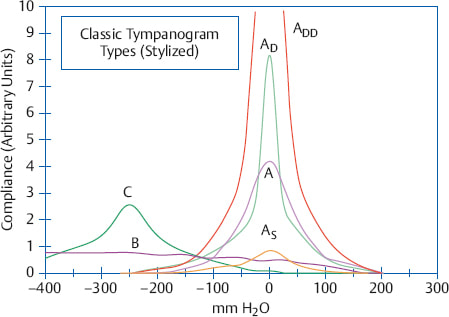 Tympanometry is an essential component of the audiologic evaluation. Use of tympanometry allows the clinician to have an objective measure that contributes to the understanding of middle ear function.

The Impact of Middle Ear Function on Tympanometric Outcomes

Tympanometric static admittance is determined by the height of the peak on the tympanogram. This measure is an indication of the amount of admittance of sound energy into the middle ear space.

Equivalent ear canal volume is a measurement of the volume of air in front of the probe in cubic centimeters (cc) or milliliters (mL) when the ear canal is pressurized to +200 daPa.

In most adult cases where there is an intact tympanic membrane, the volume of air in the ear canal in front of the probe is around 1.0 cc. In children and infants it is typically smaller. This measurement is useful for determining whether there is an opening in the tympanic membrane (either due to perforation or to patent pressure equalization tubes), which allows measurement of the entire ear canal and middle ear system, demonstrated by an abnormally large volume. Typically, when this is the case, the tympanogram shape is flat or otherwise abnormal.

Immittance at the Plane of the Eardrum

For diagnostic purposes we are mainly concerned with the immittance of the middle ear because it provides information aboutHowever, the probe tip monitors the immittance of the ear from the perspective of its location, which is in the general vicinity of the ear canal entrance. Thus the probe tip measures the total immittance of the ear, which includes the combined effects of the outer ear and the iddle ear. This is a problem because ear canal volume is usually not clinically relevant, yet its influence on the total immittance value is often big enough to cloud the effects of the clinically significant middle ear immittance value. For example, a patient with abnormally low middle ear admittance due to a conductive disorder may have a normal total admittance value due to a large ear canal volume. Another individual whose middle ear is normal might seem to have unusually low total admittance because her ear canal volume is quite small. A third patient might have low total admittance due to otitis media when first evaluated. The middle ear problem might be completely resolved when she returns for reassessment but the total Y might still be abnormally low simply because her outer ear volume was made to appear smaller by a very deeply inserted probe tip. This can happen because the volume under the probe tip will be different depending on how deeply it has been inserted.

We must removed the outer ear component from the total admittance value at the probe tip to get an undistored representation of the middle ear's admittance at the eardrum. In other words, removing the effect of the ear canal moves the measurement location from the end of the probe tip to the plane of the tympanic membrane. We can achieve this goal by taking advantage of the fact that total admittance is simply the sum of the admittances of the outer ear and the middle ear.

The pressure change is accomplished using the pressure pump connected to one of the tubes in the probe tip. The rationale for this tactic is that the heightened air pressure puts the eardrum under so much tension that it acts like a hard wall, so that essential no sound energy can be transmitted into the middle ear. This strategy prevents the probe tip from measuring the admittance of the middle ear. In this case, we say that the middle ear has been excluded from the measurement. Hence, the admittance obtained under these conditions comes from the outer ear alone

The shape, a combination of the height and location of the tympanometric peak, has long been used to describe the tympanogram. The typically used shape types are as follows:

Type B: Flat. This type of tympanogram is typically seen with middle ear dysfunction characterized by the addition of mass to the system, such as fluid behind the tympanic membrane. This type can also occur in the presence of cerumen impaction.

Type As: Abnormally low peak height and normal peak pressure. This type of tympanogram is consistent with an increase in the stiffness of the middle ear mechanism; often seen in otosclerosis.

Type Ad: Abnormally high peak height and normal peak pressure. This type of tympanogram is consistent with a decrease in the stiffness of the middle ear mechanism.